96-well plate extraction from the most difficult samples!
The Clean Pathogen Kit is designed for high throughput and reliable isolation of high quality nucleic acids from tissue, urine, serum, and fecal samples. The type of nucleic acids purified include host genomic DNA, Gram positive & Gram negative bacterial DNA, fungal spore DNA, and viral DNA & RNA. Like all Clean NA magnetic bead-based kits, its benefits include a low investment of labor, time, and money to achieve equal or better results as compared to more traditional methods, such as spin columns.

Consisting of two parts, a proprietary buffer system and CleanNA magnetic particles — these work to minimize the binding of PCR inhibiting compounds, present within the samples, onto the special magnetic particles. During the lysis step DNases and RNases are immediately deactivated offering no chance for significant degradation of target nucleic acid molecules. RNA & DNA is isolated from the lysates in one step by binding to the surface of the proprietary magnetic particles. These magnetic particles are then separated from the lysates by using magnetic separation. Following a few rapid wash steps to remove trace contaminants (e.g. proteins and cellular debris), the purified DNA and RNA is eluted from the CleanNA particles using nuclease-free water or a low ionic strength buffer. No step during this entire protocol requires centrifugation or a temperature incubation. The isolated nucleic acid is directly suitable for use in most downstream applications, such as qPCR, NGS, and other molecular biology assays.

At no point during the protocol are samples needed to be centrifuged or incubated at temperatures other than room temperature. This is done by design and makes processing simple and automation-friendly. For labs with larger numbers of samples, or those that require higher levels of sample control, the kit protocol is fully scalable and can be used manually or can be easily automated on liquid handling workstations. A list of some systems validated for work with CleanNA products include: 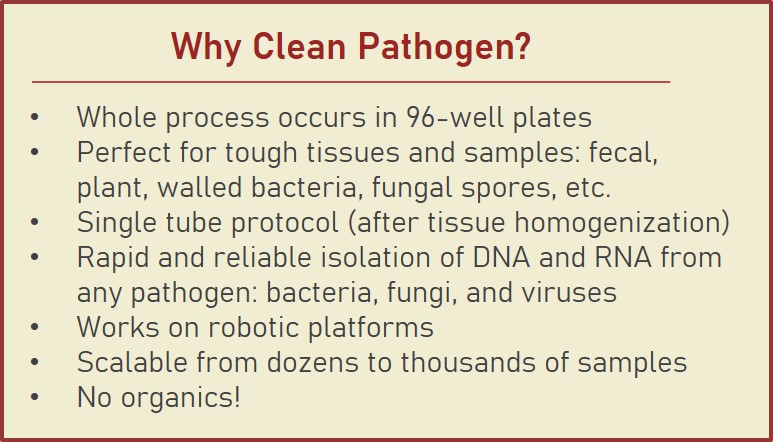