A turnkey replacement for SPRI beads
The CleanNGS kit offers a highly efficient magnetic bead-based cleanup system for the purification of both DNA and RNA for Next-Generation Sequencing and Sanger Sequencing workflows. This kit can perform both library clean-up and size selection functions. It is a direct replacement for more expensive SPRI (Solid Phase Reversible Immobilization)-based bead options. The nucleic acid cleanup protocol is a simple 4-step protocol that is completely automatable and totally reliable. 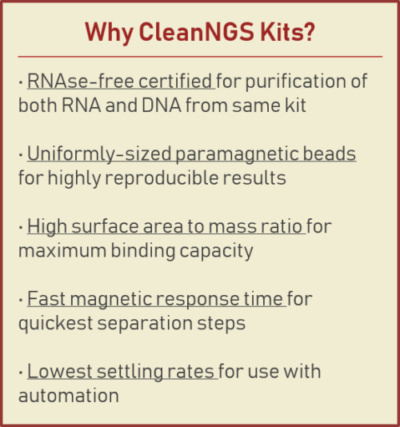 These beads disperse and float in solution as long as–or longer than—any other commercially available beads. The paramagnetic beads have been designed specifically to improve separation and migration to and from the magnet, shortening the processing time and improving separation results. This ensures consistently high yields and no contaminants. 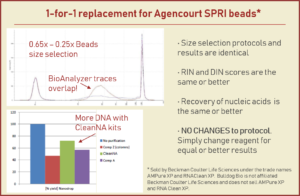 Get the right size fragments every time
Using SPRI beads for size selection is a finely-tuned protocol based upon ethanol concentration. The CleanNGS Kit has perfectly formulated solutions so that size selection is always tight and consistent. Left, right, or double-sized size selection can be performed due to the stable buffer system. The CleanNGS kit has been compared by several European labs and the results are ALWAYS POSITIVE — similar (or better) size selection and purity as compared to the other top SPRI beads. That means your lab will NOT need to reoptimize; just use the exact same protocol, whether with a robot or by hand. It’s that easy. 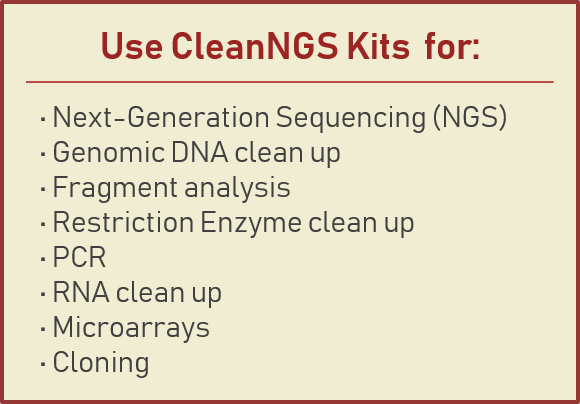 One kit to purify them all
The standard production process of the CleanNGS kit is RNase free allowing the product to be used with applications for DNA and even more sensitive RNA without any additional cost. 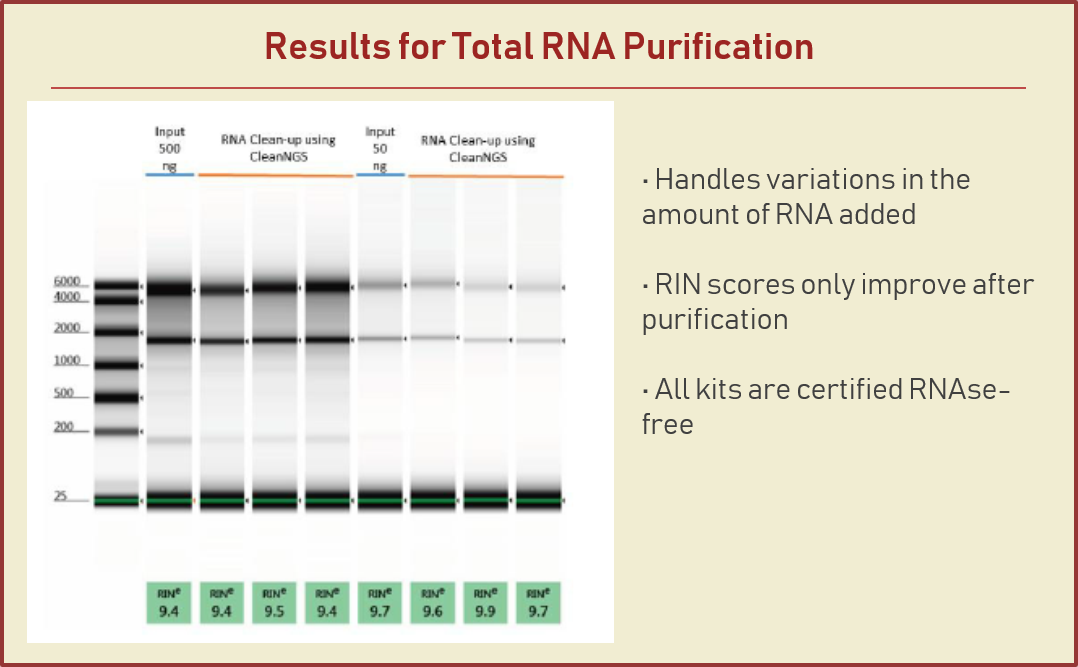 What is SPRI?
SPRI beads were developed more than 20 years ago at MIT to allow for simple, fast, and highly effective binding and elution of nucleic acid molecules. The CleanNA beads themselves are carefully made by alternating layers of magnetite and negatively charged carboxylated (non-styrene) polymer coatings around a polystyrene core. Our paramagnetic beads offer superior uniformity in size and have a density nearly that of water so that they disperse and are maintained in suspension for a very, very long time.

CleanNA bead technology works by allowing binding buffers to control the size of nucleic acids that will bind to the beads. Unlike inferior anion exchange beads (or columns), the beads don’t actually bind the DNA or RNA; they just hold them nearby in a gentle but effective jacket of water and ethanol molecules. This is why recovery is so effective and efficient as compared to other technologies. And by adjusting the concentration of ethanol, the size of DNA that “binds” the beads can be precisely controlled. It’s no wonder SPRI technology is recommended by all of the leading Next-Gen sequencing platforms.

The CleanNGS kit is based upon our proprietary chemistry and binds DNA/RNA fragments, while removing additives such as salts, primers, and primer-dimers. Sample clean up with CleanNGS results in highly purified samples eluted in water or a low-salt elution buffer.

Stick it in a robot
The CleanNGS kit is ideal for automation of sample cleanup for NGS applications. Automation of the CleanNGS protocol can be done on liquid handling platforms of most common brands. Programming the liquid handler can be done by GC biotech, eliminating difficulties during the transfer and ensuring a fully automated purification on your existing setup.

The added value of AppWizz as a Graphical User Interface (GUI) decreases the entry level for daily use on a liquid handler. The AppWizz GUI makes using the liquid handler on a daily basis very user-friendly while maintaining the necessary flexibility needed for variation in daily operations.

The combination of CleanNA technology with the Dynamic Devices liquid handler and the AppWizz software results in a dedicated, versatile, automated setting for high-throughput NGS sample purification. 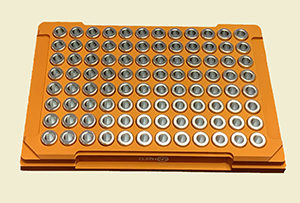