Gel Documentation System for Every Dye

Image nucleic acids and proteins
The FastGene Blue/Green LED GelPic System is one of the most compact gel documentation system on the market. Ideally suited for tight spaces on any bench-top, the system both illuminates and captures an image of your gel or blot. The Blue/Green GelPic comes equipped with three different illumination modes.

The first mode utilizes an array of blue/green LEDs (515 nm) situated around the periphery of the glass platen, which provides excitation light for both red- and green–emitting fluorescence dyes. Now you can get great images with traditional EtBr, an impossible feat with “blue-only” LED illuminators! This optimal “transillumination” configuration minimizes ambient background for super sensitive imaging with non-carcinogenic dyes like Midori Green, or other green dyes such as Sybr Green. Safer than old-style UV transilluminators, the blue/green LEDs are just as sensitive as UV light but don’t damage DNA in an agarose gel—and they won’t harm your skin or your eyes.

The second illumination mode utilizes an innovatively-designed white LED array, shining uniform backlight for transparent media such as Coomassie-stained protein polyacrylamide gels. This diffuser technology eliminates “hot spots” due to point illumination and provides maximum clarity for colorimetric-stained gels. The third mode uses white LED “epi-illumination” for lighting from above. This mode is suited for opaque surfaces such as Western blots and similar highly reflective materials.

No matter the illumination mode, the Blue/Green GelPic system captures images with a high-end, scientific grade, 9 megapixel CMOS camera for wonderful separation of color and resolution of bands. These images can be saved to a computer, or you can attach a printer directly for quick printouts.

Get your DNA the easy way
With the Fastgene system and Midori Green Stain it becomes extremely simple to excise your DNA fragments from gels. You don’t need to wear protective eyewear or worry about mutagenic dyes—just switch on the blue-green LEDs and excise your DNA fragment with our Fastgene Agarose Gel Band Cutter! Fast, precise, and totally safe, it’s the twenty-first-century way of working with DNA. 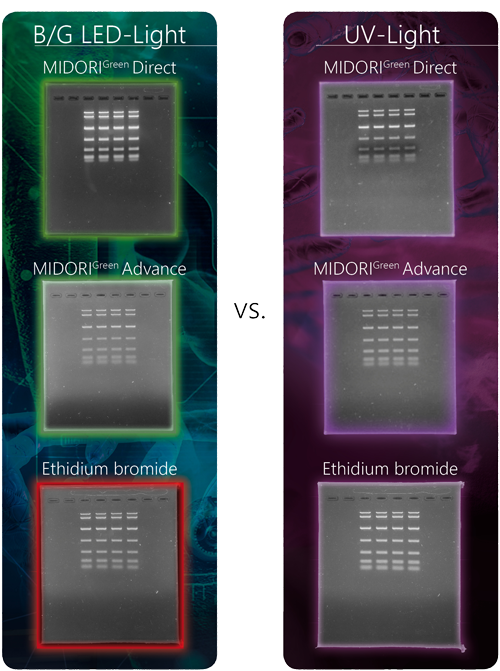 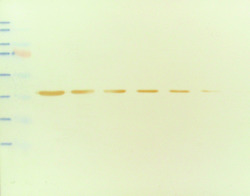 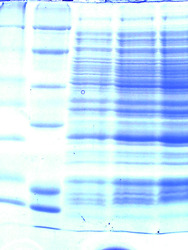 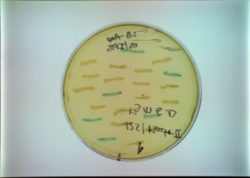 Safer for you and better for your subcloning
By using safe DNA dyes and safe LED illuminators you can improve your subcloning transformation efficiencies by THREE-FOLD. In this example, a plasmid vector was double digested with suitable restriction enzymes to create two sticky-ended DNA fragments: the lacZ gene (3,536 bp) and the backbone of the vector (4,318 bp). Equal amounts of digested DNA were electrophoresed on 1% agarose gels. The gels were stained with either ethidium bromide or Midori Green Direct gel stain according to the corresponding manuals, and then viewed using either a UV transilluminator or the FastGene Blue/Green LED Illuminator, respectively. The two DNA fragments were excised from the gels and purified using a silica membrane based purification kit. The lacZ gene and the vector backbone were religated using T4 DNA ligase transformed into DH5a cells and plated onto selection plates. The total number of blue and white colonies was counted to evaluate cloning efficiency. Each experiment was conducted in triplicate, and the average cloning efficiency was determined. Midori Green Direct resulted in dramatic increase of positive transformants. 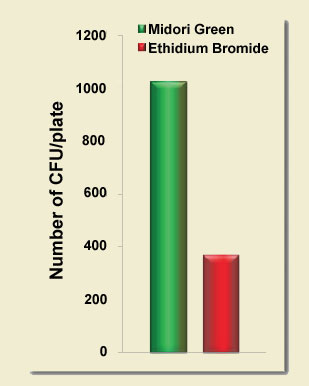 Ethidium bromide is typically used in conjunction with a strong UV light source to excise DNA bands for purification prior to the ligation reaction. Short wave-length light is well known to cause thymidine dimers and damage the DNA. The extent of this damage is not always appreciated. High energy light wreaks havoc on a DNA fragment in mere seconds. As can be seen below, after only a 15 sec exposure of DNA in a standard agarose gel, cloning efficiency starts to drop. And after a 30 sec exposure your cloning experiment is all but dead! In contrast, the cloning efficiency of protocols that use Blue LEDs seem completely immune to any deleterious effects. If your lab isn’t able to break itself of its ethidium bromide habit, using a Blue/Green LED illuminator (and imaging systems) have no significant impact on cloning efficiency or DNA integrity. 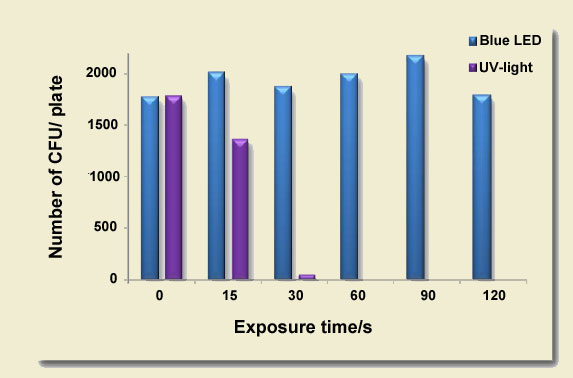 Quantitate freely
What’s better than buying the most affordable gel documentation system on the market? Downloading the compatible software used to quantify bands for protein, DNA and RNA gel bands for absolutely FREE. The GelAnalyzer software covers all the main aspects of evaluation from automatic lane detection to precise molecular weight calculations.

Oh, the wonderful things Blue/Green LEDs can do!
These blue/green LED illuminators aren’t just for gels. Your lab can detect and image just about anything that fluoresces green or red. For example, below is an image of transformed colonies on petri dishes expressing either GFP- (left) or RFP-fusion proteins (right).

Images courtesy of Unviersity of Chicago