A reverse transcriptase engineered to deliver phenomenal results
How would you construct the ideal reverse transcriptase? It would have to make very long cDNAs at high yields. It would have to be able to work from very small amounts of input RNA. And of course, it would have to work fast. FastGene Scriptase II checks all three boxes, and it does it at a reasonable price. Here’s how. First, mutations are inserted into the RNase H domain of native MMLV‘s reverse transcriptase delivering a higher yield of full-length cDNAs. Next, changes are made to increase the enzymes natural thermal stability providing a more robust enzyme that doesn’t lose processing power, even at elevated temperatures. Finally, the reaction buffer composition is optimized for high speed production of cDNAs from incredibly low levels of input RNA. This unique combination of size, speed, and production makes FastGene Scriptase II  the optimal choice for even the most complex applications requiring cDNAs, such as RT-qPCR and NGS. Here is some customer feedback! 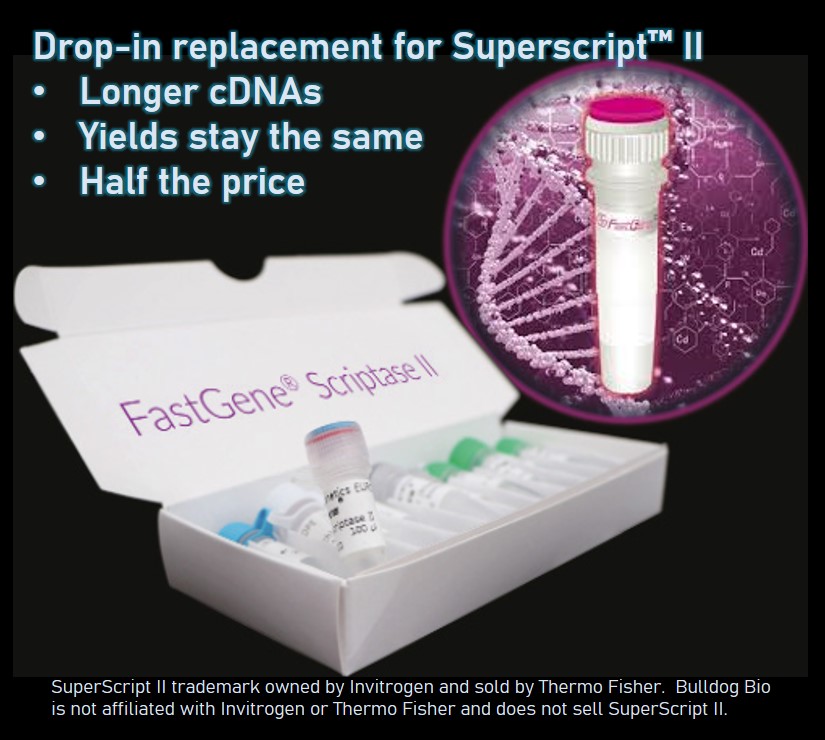 Longer cDNAs in less time
FastGene Scriptase II has a modified RNase H domain which reduces the active lysis of the template RNA. By slowing this degradation, RT enzyme allows the template to remain intact for just long enough to deliver cDNAs of greater length. It is common to achieve cDNA sizes of up to 12 kBp. The quality of this engineered enzyme is so exceptional that typical incubation times of 50 minutes can be reduced to as little as five.

The ReadyMix format makes it soooo easy!
FastGene Scriptase II comes in three convenient formats. You can purchase the Scriptase II reverse transcriptase with just the bare essentials: 5x RT buffer, dNTPs, DTT, and some RNAse-free water (LS53). You can purchase the complete cDNA synthesis (LS63), which contains everything in the LS53 format plus everything else you’ll need to optimize the perfect cDNA synthesis blend for your particular application: random hexamer primers, oligo dT primers, and RNase inhibitor. The last option is the ReadyMix format (LS64 and LS65), for those labs that need results quickly and without the need to optimize.

Expect great results from multi-plex PCR, qPCR, and NGS
The FastGene Scriptase II delivers superior cDNA templates for common downstream applications such as PCR, qPCR, and NGS. The resulting full-length cDNA is of the highest quality and gives a complete picture of the gene and any modification, such as splicing variants. Results using Scriptase II compare very favorably to the most popular brands of reverse transcriptases. For example, complicated multi-plex PCR reactions using cDNA derived from Scriptase II are indistinguishable between brands. In these examples below, GAPDH and YWHAZ were carefully examined via qPCR and both show nearly identical Ct values across a broad range of input RNA concentrations. 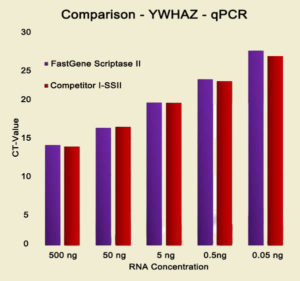 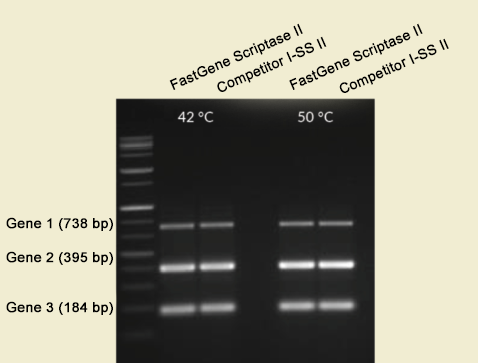 FastGene Scriptase II has been used by researchers in Europe and Japan since 2017. Here are few opinions that exemplify how labs are responding to this new reverse transcriptase.

“We use the Sciptase II Ready Mix and we were more than happy with it! We performed different qPCRs with two different controls (GAPDH and tubulin-b), for both cell lines and patient samples (Biobank frozen biopsy tissue). The results were quite good! The control values were stable compared to our old cDNA protocol, even with less RNA than before. The application and the protocol were very easy!”

“I especially like that the Scriptase II lead to stable results. As a result of performing RT-PCR using tumor derived RNA, we were able to detect the expression of genes whose amplification was unstable with other RT reagents. The Amplification of full-length cDNA has also been confirmed. I would love to also try the 5x Ready Mix.”

“We have tested the RT kit FastGene Scriptase II in comparison with other kits, like Protoscript II (NEB) and Superscipt II (Invitrogen) and we have noted that the results are similar. Additionally, we can make more “runs” for a better price!”